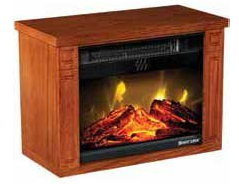 In the last few years the “Amish” style heater has gained a lot of attention, most of which is based on this particular style of heater’s ability to produce a lot of heat at a low cost. Bear in mind that not all of these units are built to the same standards, nor are they all designed to produce high levels of heat. The Heat Surge Mini Glo is advertised as being more than just another heater, it is listed as a “fine piece of furniture.” The question is whether or not this electric “space” heater fireplace is worth the investment or is it just another heater built inside a fancy setting?

Perhaps one of the biggest selling points is that the Heat Surge Mini Glo features an amazing mantle that is built with true Amish craftsmanship. Americans seem to have an undying affection for all things Amish and simply believe that if the Amish have anything to do with a product, it must be the best thing on the market. This is mainly due to the fact that the Amish have a history steeped in the ultimate in craftsmanship and quality.

So with this in mind, most buyers can accept the fact that the mantle itself has been made by “real” Amish craftsman, but this does not include the heater itself or the rest of the unit. In fact you will find that the heater is made in China and functions as well as most 1,500 watt electric heaters. Does this mean the Heat Surge Mini Glo is not worth the cost? Not necessarily, as it has far more to offer from an aesthetic view than most other forms of electric heater.

One of the reasons so many people pick the Heat Surge Mini Glo is that it makes use of fireless flame technology to provide heat. In other words your fireplace will have the look of a real fire burning inside it, but since the flames are produced using LED lights, there is absolutely no risk from any of the dangers associated with a real fire.

This means the Heat Surge Mini Glo is perfectly safe to use in practically any room in your home with minimal supervision. The micro-furnace and heat exchanger put off sufficient heat to warm up a small to medium sized room. The Mini Glo has a built-in thermostat that can be used to adjust the amount of heat being put out to suit your needs.

Overall the Heat Surge Mini Glo is safe to touch as none of the visible parts get hot enough to burn. This makes the Mini Glo a great choice for bedrooms or family rooms. It is particularly handy for use in homes where young children or the elderly live. Since the Mini Glo comes with a set of wheels, you can easily roll it from one room to the next to put the heat where it is needed most.

While the Heat Surge Mini Glo may not put out huge amounts of heat (something it is not designed to do), it does put out a fair amount of light. This is because it features a constantly moving “live” fire displayed at the back of the fireplace.

As a relatively small electric fireplace the Mini Glo may not be the best choice if you are planning to use it as the main source of heat in one or more of the rooms in your house. However, because of the beautiful craftsmanship it does make a great decoration and the “flames” will light up any room in which you care to put it.

Overall, I found the Heat Surge to be ideal for small to mid size rooms. It’s best used as a supplemental heat source. For example, we have a partially insulated sun room that can be used in the Winter, as long as it’s not below 10 degrees. When gets under 30 degrees, the Heat Surge is a perfect supplement to keep things comfortable.

I’ve also seen it used in partially finished basements for good effect. For this type of “zone heating” it’s perfect.

Keep in mind that there is no thermostat to “set” the temperature or heat output, so it’s not meant for fine tuning.

Final Thoughts: Is the Heat Surge a Good Buy?

Those who get a fully functional Heat Surge Mini Glo are delighted and say they would buy this unit again. Those who suffer with any of the above mentioned problems say that due to the lack of customer service they would never buy another one. Sometimes, it can be a bit hit or miss depending on the unit you end up with. For me, it worked fine, minus the noisy fan.

If you are looking for a heater to keep medium to large rooms warm, the Mini Glo is not a good choice. On the other hand if you are trying to warm up a smaller room and get one that works right the first time, this is a perfectly good heater.