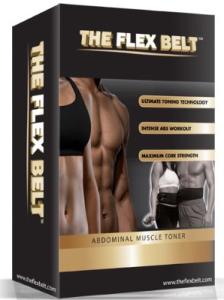 Over the course of the last few years I have looked at a wide range of exercise devices and equipment, all claiming to help tone and strengthen abdominal muscles. Now that I have started to develop a rather serious case of “muffin top”, I decided it was time to get serious and do something before it is too late. This led me to a lot of late night TV and infomercials offering a wide range of incredible devices, many of which certainly made great promises, but also looked less than truly effective. The one that really caught my eye was The Flex Belt System, a simple belt that is worn around your mid-section while you get on with your day. In this article, I’ll go through my experience in a complete Flex Belt review.

Not Your Mother’s Exercise Belt

Ok so when you mention the words “exercise belt”, the first thing that comes into many people’s minds is those old fashioned electric powered machines from the 70s and 80s that literally jiggled your fat away. Or at least this is what the manufacturers claimed, the reality was a lot more like torture than it was about losing weight and toning your muscles. The Flex Belt System is nothing like this in that not only does it not have any moving parts to cause injury, but it introduces the use of EMS (Electrical Muscle Stimulation) to do the work for you.

What Is Inside the Box?

Once the box arrived on my doorstep, I couldn’t help but notice the overall quality of the packaging, this led me to hope that the contents were of the same quality. Upon opening the box, I found the contents carefully packed to ensure they would not be damaged during shipping and that they would be easy to remove. Inside the box you will find:

Overall first impressions are that the Flex Belt System seems to be well designed and made of high quality materials. In fact, everything looks as though it will provide the average user with many years of service. The belt has three stimulator nodes, one that is designed to sit just below your belly button and two that sit to either side of it. The gel pads feature replaceable covers so that you can use them over and over again.

According to the manufacturer, these pads should last between 30 and 50 uses. I have already used them 25 times and they are just as sticky now as they were the first time I used them. The belt is secured with Velcro strips and fits small to average waists, fortunately for me there is an extender that stretches the length of the belt to fit “larger” waists.

How the Flex Belt Works

To use the belt you attach the gel pads to the belt at each stimulator node and then wrap the belt around your waist with the nodes at the proper position. Since the remote also features a rechargeable battery pack, you can go anywhere with the Flex Belt on and running. There are 150 different stimulation levels to choose from, including a number of preset programs. You simply choose the level of stimulation desired and let the electrical muscle stimulation give your muscles a complete workout.

The belt and cold sticky gel pads tend to be a bit on the uncomfortable side at first as they take a bit of getting used to. The electrical “shocks” also take a bit of getting used to and may be distracting at first, but over time you get used to them and can finally ignore them. In fact you may even feel your muscles starting to tone up while using the Flex Belt System.

Does the Flex Belt Really Work?

The big question for most people who are considering whether or not they should invest in an exercise device like the Flex Belt System, is whether or not it really works. While I did combine using my Flex Belt for half an hour daily for five out of seven days with other forms of exercise, I can definitely say that it did make a big difference. In the space of just a few weeks I lost several pounds and could visibly see the early foundations of six-pack abs beginning to form. All this from only 30 minutes of use, five days a week along with a healthy diet.

Pros and Cons to Consider

Many people have compared the Flex Belt to the Contour belt. I initially was struggling with which one I preferred (I have purchased both). While the Contour worked pretty well, I definitely preferred the Flex Belt. Both devices are FDA approved and use similar EMS technology to achieve the toning results. The main difference between the two that I found was quality.

There are many different ab toning belts, but the Flex Belt feels (and actually is) stronger than the Contour and other alternatives. I’d rather pay a little bit more up front to get something that will last a much longer time with regular usage. The Flex Belt also supports up to a 52″ waist, while the Contour can only do up to 47″. While this wasn’t a concern for me, it is a key feature that shouldn’t be overlooked. Overall, I really like the Flex Belt as a better ab belt system.

UPDATE: Another ab toning belt has been released. It’s the Easy Body Ab Shredder. I was curious to see how it measured up to the Flex Belt, so I purchased one to test it out. I’m still working on writing up a full review, but my early assessment is that it may be a bit more durable than the Flex Belt. It’s also been officially cleared by the FDA as a safe way to tone/strengthen abs (similar to the Flex Belt). It’s also about $50 cheaper (check out this listing) which is interesting as it does the same thing as the Flex Belt. Like the Flex Belt, it’s not a miracle ab toner, but it does produce noticeable results with steady (daily or alternating-day use).

Final Thoughts – Worth the Money?

It is important to understand that the Flex Belt System is not intended to be a true weight loss device. It is in fact intended to be used to strengthen your core muscles, the weight loss is an added bonus. You are not going to gain anything from using the Flex Belt if all you do is sit in front of the television eating bonbons, if you want the best results including great abs, you need to watch what you eat and add other exercises into your daily routine.

Overall the Flex Belt System is a solid device, it is FDA approved, and well worth the money, so long as you are aware of what it is intended to do. It’s not going to change your life overnight. Good diet and exercise will lead to the REAL results, but it is helpful for toning purposes. You can find the Flex Belt here for a good price.